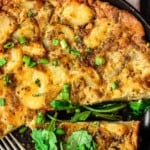 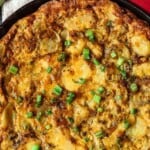 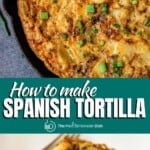 This easy Spanish tortilla (or Spanish omelette) is made with thinly sliced potatoes, onions, and eggs, gently cooked in olive oil. It's best served at room temprature or even cold, which is why this is the perfect make-ahead dish! (be sure to read through for important tips)

What is Spanish Tortilla?

What we're talking about today is not the familiar Mexican tortilla, which is basically flatbread.

Tortilla espanol or Spanish tortilla is one of Spain's most popular national dishes, and it is pretty much eggs, potatoes and onions cooked gently in olive oil. A Spanish omelette that is perfectly dense and extra satisfying.

Although it is often served as a tapa (like my earlier gambas al ajillo), this little dish can be the best meal any time of the day! And because Spanish tortilla is better at room temperature, you can make it ahead--a few hours or even one night before!

With a little technique, this simple Spanish omelette will surprise your taste buds in the best way possible (be sure to read my tips below)!

What is the difference between tortilla and frittata?

I love the way Melissa Clark of the New York Times described this dish as a "potato cake with just enough eggs to bind it together." With that, here are a few differences between Spanish tortilla and a frittata:

What goes well with Spanish tortilla?

Like I said earlier, this Spanish omelette recipe is often served as a tapa in Spain along with other nibbles and drinks. But it makes an equally satisfying brunch or even dinner next to a salad such as: lemony arugula salad; tomato salad; bean salad; or even a big Mediterranean chickpea salad. And I have on occassion served it along side tomato basil soup.

How long will it keep?

If stored properly, Spanish tortilla will keep in the fridge for up to 3 days. And since it's better at room temperature or cold, you can make it a few hours or even one night in advance. Once you make it, let it cool before refrigerating.

Browse our collection of Spanish recipes and our top 50 Mediterranean diet recipes. 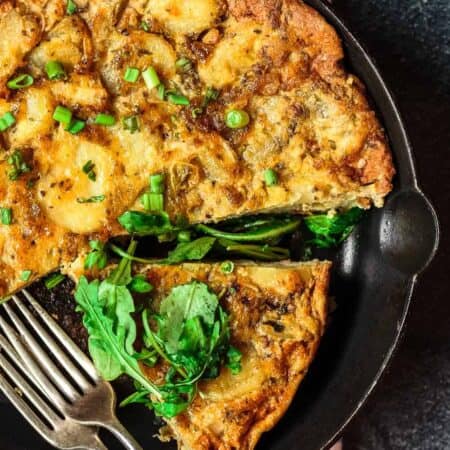 Suzy Karadsheh
Spanish tortilla or tortilla española is basically a Spanish omelette with potatoes and eggs cooked gently in olive oil. This dish is traditionally served at room temprature or cold as a tapa, but it is great for any meal of the day. Leftovers will last in the fridge for a good 3 days!
4.7 from 10 votes
Print Pin
Prep Time 15 mins
Cook Time 30 mins
Course Appetizer
Cuisine Spanish
Servings 6
Calories 381 kcal

*This post originally appeared on The Mediterranean Dish in 2017 and has recently been updated with new information for readers' benefit.