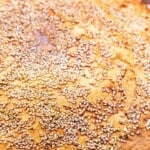 Vasilopita is a Greek New Year’s bread (or cake) with a lucky coin hidden within. This vasilopita recipe is made of layers of cinnamon-scented dough with a delicious sweet and savory combination of flavors and toasted sesame seeds. Big thanks to Karen Stoeckle for sharing her family recipe!

A few weeks ago, I asked my readers to share family holiday recipes they cherished. I was thrilled to see Karen Stoeckle’s vasilopita, a Greek lucky New Year’s bread recipe passed down to her through her Greek grandparents Mary and Gregory Matjouranis who moved to the States from Mytilene, Greece as a young couple.

Karen grew up with the tradition of making and cutting vasilopita bread every New Year’s Day, and she started making it on her own when she was just 16 years old. I loved hearing that the year she found the lucky coin is when Karen also met her husband!

I found Karen’s Greek new year's bread recipe so unique compared to what I’ve read elsewhere online, and I’m very excited to share it with you!

Vasilopita (pronounced vah-see-lo-pita) is a traditional Greek New Year’s bread (or cake) served at midnight to bring good luck into the new year. This bread is made extra special by the fact that a coin is hidden within it, and the person who finds it is said to have good fortune for the whole year ahead!

About this New Year’s bread recipe

There are variations of vasilopita. Some are sweet cake recipes, while others are more of a bread.

This recipe from Karen's Greek grand parents is a bread recipe made of thin layers of dough, flavored with sweet and savory flavors from a cinnamon and sugar mixture and grated Romano cheese, which is a unique twist (you can omit the cheese if you're looking for a sweet bread).

Decorating vasilopita also varies from one family to another. Some dust the vasilopita generously with powdered sugar, while others finish it with a sugar glaze or a sprinkle of pomegranate or sesame seeds (as in today’s recipe).

The ritual of cutting and serving vasilopita

Traditionally, vasilopita is meant to be made and served at midnight on New Year’s! There is a bit of religious component when it comes to slicing and serving this special bread—the first two slices being for Christ and Mary, the third being for the house to bless it. The remaining slices are shared among the hosts, other family members, and guests (from oldest to youngest).

About the lucky coin!

Everyone who receives a slice of vasilopita has a chance of finding the coin, which can be gold or silver plated. There are coins made specifically for vasilopita, but as I do not have any of those, I used a quarter (which I wrapped in foil before inserting into the bread dough before baking). Saint Basil is said to have started the lucky coin tradition over 1,500 years ago, as he would hide jewels and coins inside bread for the poor.

Ingredients - what you need to make this recipe

How to make vasilopita

Making this special New Year’s bread recipe takes a bit of time, but the work is worth it when you slice into delicious bread with family and friends at midnight. Here is how to make it (print-friendly recipe with ingredient measurements below).

How to serve it

Vasilopita is typically eaten plain, but I loved adding some honey over mine!

Vasilopita is made to be shared amongst family and friends right at midnight on New Year’s. And if you want to follow the religious tradition as mentioned earlier, then the first couple of slices are saved for Christ and Mary. From there, simply serve everyone from oldest to youngest.  Each person who gets a slice stands a chance to find the lucky coin!

This bread can be stored in an airtight container at room temperature for 3 to 5 days. If you prefer it warmed up, reheat it in a medium-heated oven for a few minutes.

Other bread recipes to try 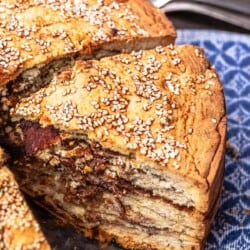 This vasilopita recipe has been passed down to one of our readers Karen Stoeckle from her Greek grand parents! It is Greek New Year's bread made of layers of cinnamon-scented dough with Romano cheese and toasted sesame seeds. Although there is no rising time involved , budget about 2 ½ hours of time for the bread to be ready.
Prep – 30 mins
Cook – 1 hr 45 mins
Cooling time 20 mins
Cuisine:
Greek
Serves – 20 slices (up to)
Course:
Bread 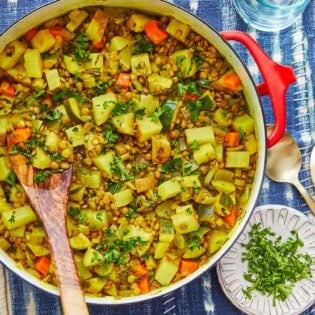 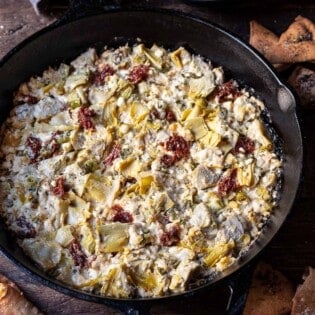 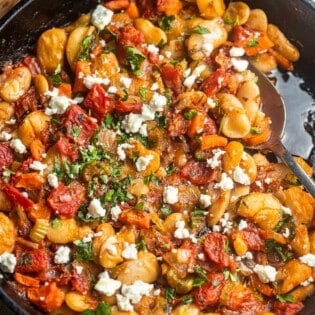