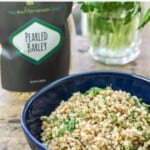 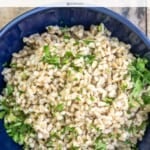 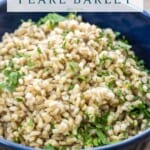 This guide is all you need to learn how to cook barley perfectly every time! Tender, chewy barley is a versatile whole grain that is nutritious, easy to cook, and can be used in many ways.

We're diving a bit deeper into my Mediterranean pantry. Today's ingredient spotlight is one of my personal favorite grains, barley!

Barley is a whole grain with a pleasant chewy texture and a slightly nutty flavor. It is also quite nutritious and rich in fiber, vitamins, and minerals, which is why it is a staple Mediterranean diet ingredient.

I love using barley in soups, salads, or as a base for delicious dinner bowls. I have used it as a stuffing for squash, and when I’m in the mood for something sweet, a bowl of warm barley with warmed milk and a good drizzle of Greek honey is my breakfast cereal.

There are two main types of barley: hulled barley and pearled barley.

Hulled barley is minimally processed where only the inedible outer hull is removed, while the grains still retain the bran and endosperm layer. It is more nutrient-dense, but hulled barley benefits from soaking in cold water for a few hours before cooking. Still it does take longer to cook (anywhere from 45 minutes to 1 hour).

My kind of unfussy grain, pearl barley is a lighter cream-colored grain, and lacks the husk and bran layers. Pearl barley is still a nutritious, although it has less fiber and is not considered a "whole grain." I mostly use the pearled version because it is easier to cook and is typically ready in less than 30 minutes (and no soaking required!)

Whichever type of barley you choose, it is easy to cook.  All you need are a few cups of water or broth and simple seasonings (plain ol’ kosher salt works just fine!).

No, barley is not gluten-free, and should be avoided by those following a gluten-free diet. Brown rice is the most similar gluten-free grain substitute in recipes that call for barley. Quinoa would also work in a pinch.

How to cook barley

Whether you are working with pearl barley as I am here or with hulled barley, the cooking method is very much the same, only one takes longer to cook. Here is how to make it:

How long will cooked barley last?

The beauty about this grain is that you can cook it ahead of time and keep it in the fridge to use on demand. You can also freeze it!

Once the barley comes to room temperature, store it in the fridge in an airtight container. It will keep in the fridge for about 3 to 4 days.

Or, transfer the cooled grains to a freezer-safe container and freeze it for up to 1 month.To reheat, defrost the barley in the refrigerator overnight. Then, add it to a saucepan on the stovetop with a few tablespoons of water. Cover and warm the barley over medium-high heat until heated through, tossing occasionally.

Ways to use barley

Its mild, slightly nutty flavor makes barley an incredibly versatile grain. You can use it in any number of ways, as it will not overpower other flavors.

Barley can take the place of almost any other grain in a recipe, but it is most similar to brown rice and farro in taste and texture.

Use it to add bulk to salads like this roasted cauliflower salad or soups including my turmeric lemon chicken soup (I intentionally don't add noodles to this chicken soup so that I can use grains when I need to add volume).

I especially like using pearl barley as a bed for stews, making them even more comforting. A particular favorite of mine to pair with barley is this Mediterranean-style chicken stew – warming and hearty in the best way!

You can also use cooked barley to replace rice in simple dinner bowls like my Mediterranean tuna bowls or Lebanese chicken fatteh bowls.

And for something sweet, I love cooking pearl barley into a porridge and flavoring it up with some dried fruit, pungent spices, and a little brown sugar, like in this burbara recipe.

Really, the possibilities for this wholesome grain are endless. Use your imagination to create unexpected pairings!

Is barley healthier than rice?

Barley has a similar nutrient profile to both white and brown rice. However, it has more fiber. If you are looking to increase your fiber intake, barley is the better option.

What are some barley nutritional benefits?

It is a very rich source of fiber, which both helps you stay full for longer, and improves digestion. It’s also rich in vitamins and minerals (such as copper, manganese, selenium, and vitamin B3).

Do you have to soak barley before cooking?

Pearl barley does not need to be soaked prior to cooking because it cooks quickly. Hulled barley benefits from soaking in water for a few hours before cooking. However, you should still budget more time for the hulled grain to cook (about 35 to 40 minutes).

Featured from our shop: Pearl Barley. View all grains.

How to Cook Barley 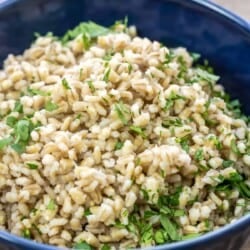 This simple guide will teach you how to cook barley perfectly every time! You can use hulled barley or pearled barley (I personally prefer the no-fuss, quick cooking pearl barley). Hulled barley will benefit from soaking in water for a few hours before cooking, and it will take longer to cook than pearl barley.
Prep – 5 mins
Cook – 25 mins
Cuisine:
Mediterranean
Serves – 4 people
Course:
Side Dish

Sautéed Cabbage with Garlic and Lime