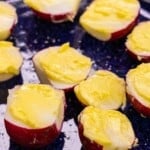 Simple and elegant, radish and butter is a popular French snack you'll be making on the regular! For this homemade radish snack recipe, you can serve the radishes sliced and topped with the butter and salt, or leave them whole and serve the butter and salt to the side for dipping. Fresh and delicious either way!

Radish and butter, a match made in...France!

Peppery, crispy radish with butter and finished with a pinch of flaky sea salt is a French snack that is both simple and elegant.

I'm not typically a butter person (other than the occasional cookies, I mostly rely on good olive oil and rarely use butter for anything). But, I fell in love with this idea of radish and butter while visiting Paris a few years ago. And it's one of the easiest fresh, low-carb treats you'll make!

A little radish snack story from my Paris trip

I took a trip to France and Switzerland back in April of 2009. It was a work-related trip with more of an academic agenda focusing on tracing the Protestant reformer John Calvin’s steps (I worked for a university at the time). Still, the food experience will always be memorable from a fancy dinner at one of the Eiffel tower restaurants, all the bubbly on the Champagne Route and a stop at Moet & Chandan wine cellars in Epernay, and the best escargot at a small Parisian bistro (can’t remember the name of it).

It sounds funny, but one of the big food revelations for me was the brilliant combo of radish, salt, and butter, which I learned is a popular spring appetizer in Paris.

One afternoon, our tour guide Robert and I shared crunchy radish, served whole with their greens with a side of softened French butter and a little dish of flaky salt. I don’t remember exactly where, but I do remember Robert also buying a fresh baguette. We dipped the radish in the butter and sprinkled a little salt on top. You could cut a radish and enjoy it over a buttered slice of fresh bread.

Why do people eat radish with butter?

The butter truly tones down the peppery, hot flavor of radish and turns it into an indulgent treat. Dorie Greenspan explains, "It’s a little trick the French play to bring foods into balance, and it works."

But it's important to use quality butter for this simple dish. Personally, I have not yet found butter as delicious as the French butter I tried on that trip. In doing some research, I learned that in France, butter is made from cultured cream that is slightly sour, which is why their butter is tangy-sweet and somewhat nutty.

If you can get your hands on good French better, then you’ve struck gold here! I've often used Kerry Gold butter as well.

Ways to serve radish and butter

In this homemade version (and as you saw on Instagram and TikTok) to serve this fun snack, you simply trim the leaves and stems off the radish, cut it in halves, and spread a bit of softened butter on each half (it's important for the butter to be at room temperature). Finish with a pinch of sea salt or kosher salt.

But, if you want to prepare it closer to the delicate French way, you'll leave a small bit of the radish stem at the bottom so you can hold the buttered radish like a little lollipop and dip it in a little sea salt or sprinkle the salt on top.

(And a side note, if you want to make a Middle Eastern version of this, serve the radish with a little labneh in place of butter)

You can find radishes year-round; some grocers will have them already trimmed and bagged in the refrigerator section. But if you're after the best fresh, in-season radish with the long green leaves, look for them in the produce section particularly in April or May (they're likely near things like parsley and green onions).

Young, fresh radishes that are in season will be milder and not as hot (and you can even use their leaves for salad greens). When buying them, check the tops; they should be bright green. And give your radish a squeeze to make sure they are firm and not hollow or soft in the center.

Radish with Butter and Salt 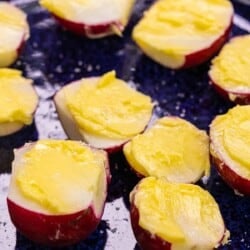 Sliced radish and butter, finished with a pinch of salt is a simple French snack where the butter cuts the hot pepperiness of the radish, giving you an indulgent low-carb treat in seconds. I use butter very rarely, otherwise, but it does work here. This is my homemade version of the popular French snack. Use the best radishes you can find (the greens should be bright and not wilted, and the radish should be firm) and quality butter at room temperature.
Prep – 5 mins
Total – 5 mins
Cuisine:
French
Serves – 4 people
Course:
Snack