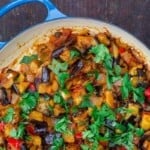 You'll love the combination of savory, sweet, and sour flavors in this creamy eggplant caponata with onions, tomato and olives! A great make-ahead appetizer to serve over crusty bread or use next to chicken or fish!

In Mediterranean cooking, there is no shortage of tasty eggplant recipes! Some favorites around here include eggplant rollatini; classic moussaka; and stuffed eggplant.

You'll love the loads of texture and flavor in this vegan eggplant salad. And because it tastes better the next day, it's the perfect make-ahead appetizer to serve over crostini or toasted bread of your choice.

Caponata Sicilian is one of Sicily's essential dishes. Pronounced ka·puh·naa·tuh, it is a vegetarian eggplant salad--more like a relish, really--made of eggplant, onions, bell pepper, celery and tomatoes with briny olives and capers.

There are variations of this tasty eggplant salad. Most are spiked with vinegar. Some call for raisins, which I love and use in this caponata recipe.

For a kick of sweetness, many recipes call for brown sugar, but I use a bit of honey, which is sufficient given the addition of raisins.

If you have them, add some toasted pine nuts at the very end.

Some describe caponata as the Sicilian version of ratatouille.

The two may have something in common as both use diced summer vegetables cooked with a bit of tomato. But, to me, ratatouille is more of a saucy stew, and the veggies will vary depending on what you have on hand.

Caponata is more of a salad or an appetizer that is altogether savory, sweet, and sour, thanks to the use of briny olives, salty capers, sweet raisins, and a spike of vinegar.

It's best served at room temperature topping some crusty bread. And it's also great as a relish to elevate your roast lamb, chicken or fish such as pan-seared salmon or trout.

What you'll need to make it?

The ingredients to make caponata are simple and readily available in most grocery stores. Together, they give this little vegetarian eggplant salad all sorts of beautiful texture and special flavor. Here's what you'll need:

Typically, capontata starts with frying cubed eggplant in a bit of oil until browned. While I love fried eggplant, in this case, I found roasting the cubes to offer the same result. Plus roasting is less hands-on, so I can work on the rest of the ingredients while the eggplant is roasting.

Once the eggplant is fully roasted, it's added to the pan with the rest of the ingredients which have been braising to create a tasty, sweet and sour base or sauce.

How to make caponata?

Eggplant caponata is better the next day, but if you need to serve it on the same day, let it sit at room temperature for 1 hour before serving.

If you love this caponata, then our equally delicious zaalouk is a must try. An eggplant dip with a Moroccan twist!

You can store caponata in the fridge in a tightly-closed mason jar for 5 days or so, or freeze it for later use. Bring it to room temperature before serving.

For all recipes, visit us here.  JOIN MY FREE E-MAIL LIST HERE. 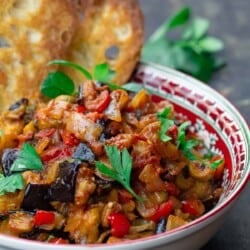 Sicilian caponata is a tasty salad or relish made of eggplant with onions, celery, and tomatoes and augmented with tangy olives and capers. It's best the next day, so try to make it ahead and store it in the fridge in a tight-lid mason jar. Bring it to room temperature before serving.
Prep – 20 mins
Cook – 45 mins
Cuisine:
Italian
Serves – 6 people
Course:
Appetizer, Entree, Salad 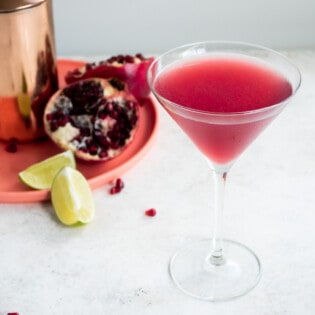 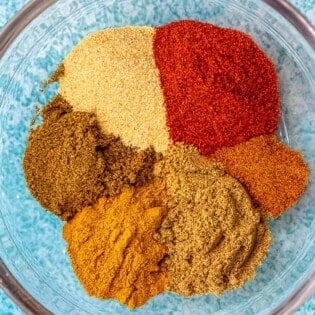