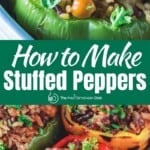 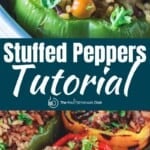 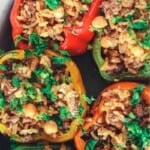 Best part, you can prepare these ahead of time! Be sure to check out all the tips along with the step-by-step tutorial and video below.

We're obsessed with stuffing all the vegetables around here!

In fact, stuffed vegetables are their very own class within Greek and Mediterranean cooking. In Greece, they are called gemista or yemista (γεμιστά), which means things that are filled.  And in the Middle East, they're called mahshi, which literally means stuffed!

My mom's signature Greek stuffed peppers recipe is one of those comfort foods I have always loved, and I've added my own twist on her recipe.

About this stuffed peppers recipe

These stuffed bell peppers are dairy free and gluten free. They are delicious and totally hit all the right flavor notes for me. And it all comes down to two things: the tasty Greek-style stuffing and how you prepare the bell peppers.

The stuffing or filling mixture is dairy free and gluten free made of well-seasoned meat mixture with rice, chickpeas, and fresh parsley. For spices, I used a combination of allspice, sweet paprika and garlic powder (although 2 minced garlic cloves do the job, if you don't have all-natural garlic powder). For this recipe I do cook this meat mixture first before stuffing the peppers.

The bell peppers. I use a variety of mild peppers here--green, red, and yellow. They do not all taste the same. Green peppers are a bit more on the savory/bitter side while red peppers tend to be sweeter. Choose what you like. For a Greek style bell peppers recipe, here is how you prepare the peppers:

How to Make Stuffed Peppers

Do you have to cook the meat before stuffing the peppers?

For this recipe, I do like to cook the meat before hand. And you'll notice, the entire stuffing mixture of meat, rice and chickpeas is fully cooked before adding to the stuffed bell peppers. This is really a fool-proof way that ensures the stuffing is cooked well and evenly and reduces the risk of having it be under-cooked or too mushy.

You can totally make this recipe your own. Here are a few variations you can try on this Greek stuffed peppers recipe:

You can work on this recipe one night ahead. You can prepare and cook the stuffing fully (that's the meat, rice and chickpea mixture) and you can also core and grill the bell peppers. Let everything cool and store each separately in the fridge.

The next day, proceed with the recipe and stuff and assemble the bell peppers for baking. It helps to bring things to room temperature in preparation for baking, but that's optional.

Can you freeze stuffed peppers?

If you end up with leftovers, you can freeze these dairy free stuffed peppers.

First, be sure to cool the stuffed peppers completely. You can portion them in freezer-safe containers and freeze for 1 to 2 months. Thaw in the fridge overnight and warm up in a medium-heated oven (it helps to add a little bit of liquid to your baking dish, and cover the peppers before placing in oven.)

What to serve with stuffed bell peppers?

To serve this stuffed peppers recipe as a main course, plan on 1 bell pepper per person with sides like Greek tzatziki, Greek salad, or this Black Bean and Corn Salad!

As a side, you can plan on ½ bell pepper per person next to proteins like lemon chicken drumsticks, baked cornish hen, or slow cooker lamb.

Watch the video for this recipe:

Check out our collection of Mediterranean diet recipes. For all recipes, visit us here.

You'll love these stuffed peppers, prepared Greek-style and stuffed with a perfectly seasoned meat mixture with rice and chickpeas and fresh herbs. You can prepare parts of this recipe ahead of time, and you can even freeze leftover stuffed peppers! Serve them as the main coarse or a side dish.

*This post originally appeared on The Mediterranean Dish in 2018 and has been recently updated with new information and media for readers' benefit.