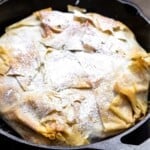 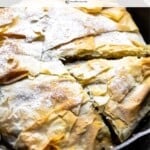 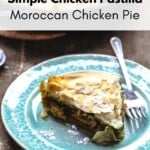 A known dish in the Magreb, particularly Morocco and Algeria, Pastilla (or bastilla) is a savory chicken pie made with crispy, flaky phyllo dough and a tender shredded chicken filling, seasoned with warm North African flavors including Ras El Hanout, ginger, and cinnamon. You can make it in a skillet!

I think of chicken pastilla, also known as bastilla or b’stilla, as an exotic North African version of chicken pot pie. But it’s so much more! This savory pie makes a delicious centerpiece for a special dinner. It's not difficult to make, but it will take a little time. Well worth it, though!

Its name comes from the Spanish word for pastry, pastilla (pronounced pas-tee-yah)! Pastilla is a rustic, sweet-and-savory North African chicken pie made of a tender shredded chicken filling and shaved almonds, seasoned with warm spices (including Ras El Hanout), and nestled in layers of flaky phyllo pastry. It tastes just as good as it sounds, and it’s easier to make than most people think!

Pastilla originated in the Magreb and is a speciality of Morocco and Algeria.

About this pastilla recipe

Nowadays it is common to cook pastilla in a large oven-safe skillet and to use shredded chicken and phyllo dough for this savory pie, as I do here. Traditionally, however, pastilla was made with pigeon along with crispy warqa, which literally means “paper,” a thin dough similar in texture to phyllo.

Many recipes call for sugar, but I opted for a few pitted medjool dates in the chicken mixture and a light dusting of powdered sugar at the very end instead.

The star seasoning in this pastilla recipe is Ras El Hanout, a North African blend of spices including cinnamon, turmeric, cloves, allspice, cardamom, ginger, mace, nutmeg, and a touch of cayenne. With that abundance of warm spices, Ras El Hanout is a good shortcut and a sure way to add plenty of flavor to this pie.

Bastilla pie makes a beautiful celebratory meal to share with friends and family, or anytime you feel like serving a delicious savory pie that is also pretty to look at. While not hard to make, its preparation is a bit time-consuming, so I like to make pastilla on a weekend when I have a couple hours to spend.

Moroccan pastilla is composed of two main components: the flaky phyllo pastry (which you can find in the freezer section of your supermarket near the pie crust) and the succulent chicken filling. Here is what you’ll need to make it:

How to make pastilla or bastilla (step by step)

Even though this Moroccan pastilla recipe takes a bit of time to prepare, it is not an overly complicated chicken pie to put together. Follow these steps to make it (printer-friendly recipe below):

Tips for working with phyllo and more

If you want to work ahead, you can make the chicken filling one day in advance. I wouldn’t recommend baking the whole pie in advance and then reheating, as this will affect the texture. For the full wow effect, you’ll want the chicken pastilla to be crisp and fresh out of the oven.

How to store and reheat leftover Moroccan bastilla

This dish is best enjoyed and finished right away, but leftovers will keep for three to four days in an airtight container in the fridge. To reheat, brush the top of the pastilla lightly with extra virgin olive oil again and place it on a sheet pan in a 375 degrees F-heated oven for a few minutes until warmed through.

Serve this savory chicken pie with

Pastilla is a rich, satisfying meal on its own, but it’s never a bad idea to add some color in the form of roasted vegetables, Moroccan-style carrot salad, or another big salad like my Mediterranean bean salad. 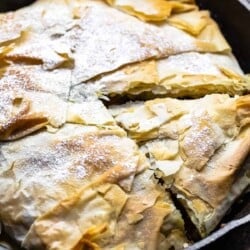 This savory chicken pie is made with flaky phyllo dough and a tender, richly seasoned chicken filling with warm North African flavors including Ras El Hanout. If you want to work ahead, make the succulent chicken filling a day ahead and keep it in the fridge. Pastilla is delicious served by itself, or with roasted vegetables, Moroccan-style carrot salad, or another big salad like my Mediterranean bean salad.
Prep – 30 mins
Cook – 20 mins
Cuisine:
Moroccan, North African
Serves – 8 Slices
Course:
Entree