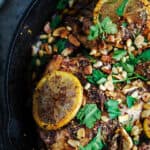 Za'atar Roasted Chicken Breast Recipe...an easy one-skillet chicken dinner that will have your taste buds going crazy (in a good way!) Za'atar is a flavor-packed spice blend of Mediterranean wild thyme and toasted sesame seed.  You can find all-natural za'atar spice right here in our online store. Be sure to check out the step-by-step tutorial for this za'atar chicken!

When I posted my recipe for cilantro-lime chicken thighs (another awesome chicken dinner, by the way), a reader wrote to me about her big dilemma involving her husband eating only chicken breast. Well friend, today is your day! But another dilemma that more of us deal with is that roasted chicken breasts are tricky to cook because they often end up on the dry side.

I've been experimenting with cooking chicken breasts for a little while now, and I can honestly say, this is one of the best roasted chicken breast recipes you will find. This recipe, adapted from Ottolenghi: The Cookbook, is a spin off a chicken dinner from my childhood.  The citrus-based marinade with all sorts of Eastern Mediterranean spices is the key to this recipe's success. It acts as a tenderizer to the chicken breasts, meanwhile, infusing them with awesome flavor.

You are probably more familiar with allspice, sumac and other spices used here. But don't let za'atar scare you. It is an amazing Middle Eastern spice blend that has both earthy and subtle citrus undertones. It often includes spices like marjoram or thyme, oregano, and sumac. And it always includes sesame seeds, which add a nice nutty and woodsy flavor to the spice mix.

We all love a roast chicken dinner. After all, it's quick prep and you can let the oven do the hard work! You will not regret spicing up your roasted chicken breasts this way, though.  What to serve it with? Try Israeli couscous salad, or roasted Greek potatoes.

Step-by-step instructions for this Za'atar Chicken:

Preheat the oven to 400 degrees F.

Roast the chicken in the heated oven for 35 minutes or so. Remove from heat and allow the chicken 5 minutes to rest. The chicken is ready to serve when its internal temperature reaches 165 degrees F.

Sprinkle with a little more sumac and the remaining za'atar. Garnish with the toasted nuts and fresh parsley. Enjoy!