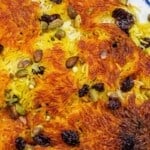 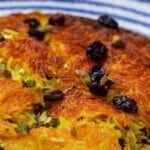 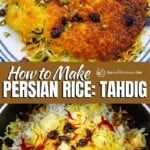 Have you ever wanted to make Tahdig Persian Rice with that perfectly crispy golden crust? This recipe and step-by-step tutorial is all you need! And I have lots of ideas for what to serve along!

Tahdig has been on my list to make for while. And I'm happy to report it is easier to make than I thought! And if you ever wanted an impressive and unique dish for a special dinner, this Persian style rice with golden crust will not disappoint.

I used a recipe from Eden Grinspahn's new book Eating Out Loud (affiliate link), with some very slight modifications.

Tahdig, pronounced tah-deeg, literally means "bottom of the pot" in Persian. And it refers to a beautiful, pan-fried Persian rice that is fluffy and buttery on the inside with a perfectly golden crust, which is the layer at the bottom of the pot. It's beautifully laced with saffron and often scented with orange zest like in today's recipe.

You're basically building a rice "cake" with layers of rice, yogurt, and butter. It gets cooked in a tightly covered pan, where the steam cooks the rice while the outside crisps. Then it's turned upside down out of the pan on a platter, where--if you've done your job right--the crispy outside bits hold the moist inside like a mold.

Tip: Don't be a hero, use a nonstick pot. Makes all the difference!

What kind of rice to use for Persian rice?

The kind of rice used is important. My Iranian friends only use Basmati rice (affiliate) for all their Persian rice dishes, and it's what is used in this recipe.

Two steps to prepare the rice for this tahdig recipe:

The crust is where it's at! It's what makes this Persian rice recipe extra special.

What makes the crust? There are different tahdig variations when it comes to acheiving that perfectly crispy, golden crust. Some use a layer of flat lavash bread at the bottom of the pot, while other recipes may use a layer of thinly sliced potatoes. But it's the third method I wanted to try... 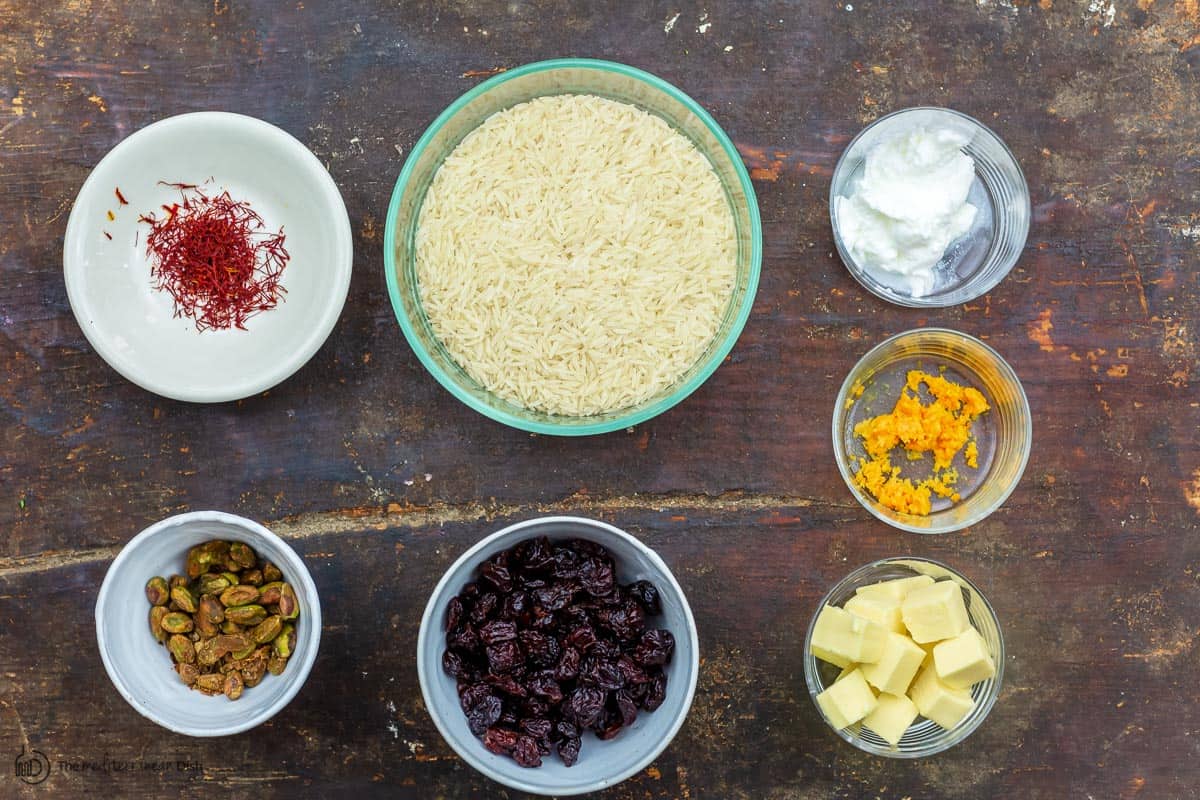 How to make tahdig: step-by-step

What to serve with tahdig?

This crispy saffron rice can elevate any number of entrees. Here are some ideas for what to serve along: 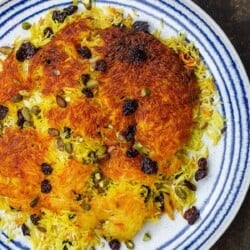 Tahdig, pronounced tah-deeg, literally means "bottom of the pot" in Persian. And it refers to a beautiful, pan-fried Persian rice that is fluffy and buttery on the inside with a perfectly golden crust, which is the layer at the bottom of the pot. This tahdig is laced with saffron and scented with orange zest. Be sure to use a nonstick pan for this recipe. Step-by-step photos and more tips in the post.
Prep – 10 mins
Cook – 40 mins
Cuisine:
Persian
Serves – 8 people
Course:
Side Dish