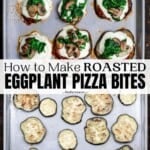 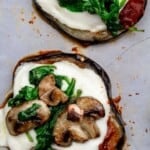 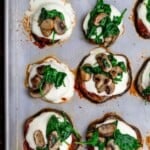 Turn eggplant into pizza crusts with this delicious eggplant pizza recipe! Tender roasted eggplant rounds are a low-carb, gluten-free vehicle for a variety of toppings. Enjoy eggplant pizza as a snack or a light meal!

I like classic pizza as much as the next person, but when I wanted  a gluten-free alternative to serve some friends, eggplant came to the rescue.

When roasted, the eggplant becomes tender but is still sturdy enough to support pizza toppings, which makes it the perfect gluten-free, low carb pizza option to serve my veggie-loving friends.

I am all about using eggplant in unusual ways – heck, I’ve turned the deep purple fruit into vegan meatballs, delicious dips, and even fries, so eggplant pizza makes perfect sense to me!

This time, I went with vegetarian toppings: spinach, mushrooms, mozzarella cheese, and marinara sauce. But, like any pizza, the topping possibilities are endless.

So go ahead and grab an eggplant, slice it up, and top it with your favorite ingredients. Get the kids or your friends involved and dinner will be on the table in about 35 minutes!

It’s never a bad idea to raid your fridge for things to use as toppings for your eggplant pizza recipe. Here is what I ended up using:

The wonderful thing about pizza is when it comes to toppings your imagination is the only limit! This is such a great recipe to have fun and get friends and family in on the process. To make this a group event:

I used spinach and mushrooms, but if they aren’t your thing, here are some ideas for other eggplant pizza toppings to try:

How to choose eggplant for pizza

The best kind of eggplant for eggplant pizza is called a globe eggplant, which is the deep purple oblong eggplant you see at most grocery stores. It is also larger and will give you decent-sized rounds to work with.

Many people think eggplant is a vegetable, but botanically speaking it's actually a fruit (the same is true for tomatoes), and it’s part of the nightshade family. People with sensitivity to nightshades should keep that in mind when making this recipe.

When selecting the best eggplant, give it a good onceover. Here are some things to look for:

Once you get home, cut into the eggplant to confirm that it’s good. The flesh should be white with tan to brown spots around the seeds. If there is more brown than white flesh, it is spoiling and needs to be thrown out.

Remember, if you don’t plan to use the eggplant within 2 days of purchasing, place it whole into the refrigerator, and use it within 7 days.

Should you peel eggplant before roasting?

I prefer to keep the skin on when I roast eggplant for this reason — not to mention it’s a gorgeous color to boot! But in the end, it’s really a matter of preference.

Sometimes the skin can be a little tough, especially in larger eggplant. If you buy one on the smaller side, you’ll find the young skin will likely be tender.

Should you salt eggplant before roasting?

This is a hotly debated topic, and it is really an optional step. But I do try to salt my eggplant first and allow it some time to “sweat.”

I recommend salting the eggplant slices as the result is a more flavorful dish. The salt also helps break down eggplant's spongy texture a bit, giving the eggplant pizza a tender, meatier bite.

Here’s how to salt eggplant: Slice the eggplant into rounds. Sprinkle with kosher salt and arrange on paper towels. This allows the eggplant to sweat out its moisture for a few minutes. Make sure to dab the slices dry before roasting.

How to make eggplant pizza

What to serve with eggplant pizza

I like serving these low-carb gluten-free pizza as a snack with other small bites. Here are some of my favorites:

Eggplant pizza also makes a tasty light lunch with nothing more than a crunchy lettuce or cucumber salad on the side.

If you like, you can turn the eggplant pizzasinto a side next to something meaty, like green goddess chicken, turkey meatballs, or even something fancy like beef tenderloin.

Typically, my family will snack on these eggplant pizzas throughout the day until they’re gone, but they keep quite well in the fridge! Store them in an airtight container in the fridge for up to 4 days.

To reheat, pop them onto a sheet pan and into the oven at around 350°F until warmed through. 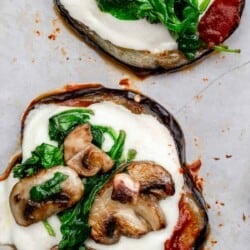 Roasted eggplant rounds act as pizza crust, topped with fresh mozzarella, mushrooms, and spinach. These easy-to-make, gluten-free, low-carb eggplant pizza rounds are ideal as a vegetarian side, for lunch, or as a snack! The great thing about pizza is that you can switch up the toppings. I went with vegetarian options this time, but you could use different sauces like pesto, different veggies (like bell peppers or zucchini), and add meats like prosciutto or shredded chicken!
Prep – 15 mins
Cook – 20 mins
Inactive Time (Optional Eggplant Salting Step) 20 mins
Cuisine:
Italian
Serves – 6 servings
Course:
Appetizer, Dinner

*This post was recently updated with new information for readers' benefit.