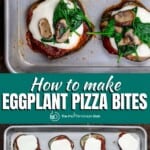 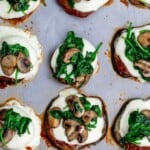 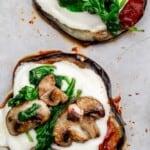 Roasted eggplant rounds act as pizza crust, topped with fresh mozzarella, mushrooms, and spinach. An easy, lower carb, and gluten-free option, these eggplant pizza bites are ideal as a vegetarian side, for lunch, or as a snack!

I like classic pizza--crust and all--as much as the next person, and I don’t see that changing anytime soon. But these easy eggplant pizza bites are a fun idea to try when you’re craving pizza but need something on the lighter side that doesn’t take too much effort to prepare.

Here, tender roasted eggplant rounds act as pizza crust.  And when it comes to choosing eggplant pizza toppings, the possibilities are endless! I kept mine vegetarian this time…

It’s never a bad idea to raid your fridge for things to use as toppings for your eggplant pizza. Here is what I ended up using:

Other topping options: You can totally make this eggplant pizza recipe your own by changing up the toppings. Add a handful of cherry tomatoes or olives. Try a different combination of veggies like bell peppers, zucchini and onions. Or go for a margarita pizza with mozzarella cheese, sliced tomatoes, and basil. So many options!

Now let’s move onto the meat of this recipe, which, in this case, is a fruit: the eggplant.

How to select a good eggplant?

First, let’s talk about the type of eggplant you need for this recipe.  The obvious and most convenient choice is  globe eggplant, which is readily available in most supermarkets all year round. It is also larger and will give you nice-sized rounds to work with.   The next step in selecting a good eggplant is to give it a good onceover. It should be heavy for its size (smaller globe eggplants are known to have less seeds and taste less bitter than larger ones) Examine skin, it should be shiny, tight, and unblemished. I like to give the eggplant a gentle squeeze to feel for any dents or soft spots. The stem should be green; if it’s browning or developing mold, it’s time to be discarded.

When you cut into the eggplant, the flesh should be white with tan to brown colored spots around the seeds. If there is more brown than white flesh, it is spoiling and needs to be thrown out.

And remember, if you don’t plan to use the eggplant within 2 days of purchasing, put it whole in the refrigerator, and use it within 7 days.

Should you peel eggplant before roasting?

Eggplant skin is incredibly nutritious, loaded with antioxidants, vitamins, and minerals. I prefer to keep the skin on when I roast eggplant for this reason — not to mention it’s a gorgeous color to boot! But in the end, it’s really a matter of preference. Sometimes the skin can be a little tough, especially in larger eggplant. If you buy one on the smaller side, you’ll find the young, nutrient-rich skin will more likely be tender.

Should you salt eggplant before roasting?

This is a hotly debated topic, and it is really an optional step. But, whether I’m making eggplant caponata, eggplant lasagna casserole, or something as simple as today's roasted eggplant pizza recipe, I do try to salt my eggplant first and allow it some time to “sweat.”

I recommend salting the eggplant slices  as the result is a more flavorful dish. The salt also helps break down eggplant's spongy texture a bit, giving the eggplant pizza a tender, meatier bite.

Here’s how to salt eggplant: Slice the eggplant into rounds. Sprinkle with kosher salt and arrange on paper towels. This allows the eggplant to sweat out its moisture for a few minutes. Make sure to dab the slices dry before roasting.

How to make Eggplant Pizza Bites with Spinach and Mushroom

(You can scroll down to the print-friendly version with the complete ingredient list).

Visit Our Shop to browse quality Mediterranean ingredients including olive oils and spices! 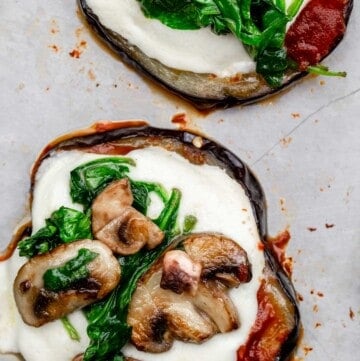